Ask the Goblin Priestess for help

Get help from Healer Nettie

Tell Omeluum about the parasite

There are multiple clues about how to remove the parasite inside your brains. However, in Early Access, none of these methods can successfully remove the illithid larva in your head. You will have to find other means in the future adventures. (In Early access, there's no time limit for this quest.)

Get Help from Druid Halsin

Omeluum, the Illithid in Underdark

How to unlock Remove the Parasite

Lore about Mind Flayers/Illithids and the Ceremorphosis

Mind flayers (illithids) are genderless creatures, without male or female biological sex, and once or twice in their life they would lay a clutch of eggs from which tadpoles hatched. The tadpoles were kept in the elder brain tank, where they were fed brains by caretakers and engaged in cannibalism for around ten years. The elder brain also fed exclusively on tadpoles. Tadpoles that survived to maturity were put through the ceremony of ceremorphosis, where each was implanted into a humanoid victim and devoured its brain, taking its place and merging with the body to transform it into a new illithid. Only some humanoid species were suitable hosts for illithid tadpoles.

The multiplication of mind flayer colonies happened when a tadpole, quite rarely, through ceremorphosis, created a more powerful form known as an ulitharid (meaning "noble devourer" in Undercommon), which was biologically bigger, stronger, and more powerful and cunning than regular mind flayers. They possessed six face tentacles instead of the regular four. Most notably, however, they were not controlled by the elder brain. The appearance of an ulitharid caused a burst of growth in both the colony's size and capabilities. Elder brains grudgingly accepted the appearance of a potential rival, because eventually the ulitharid broke off from the colony. When doing so, it took a few mind flayers with it and sought to establish a new colony in a distant location from the original. Eventually, the ulitharid transformed into a new elder brain.

The process of ceremorphosis usually requires seven days, after the initial stage was completed, the original creature was lost and beyond help, except for Wish or Miracle (Lv 9 spells). Over a period of approximately one week, the host's body underwent extensive morphological and tissue changes, completely transforming into a mind flayer. Internal organs were reshaped, but retained their original purpose. Until ceremorphosis was completed, the emerging mind flayer remained helpless.

If, for some reason, a mature tadpole did not undergo the process of ceremorphosis, it became a ravenous predatory creature known as an illithocyte or, if allowed to grow out of control, a neothelid.  These creatures were considered abhorrent by the illithids and were mercilessly hunted. 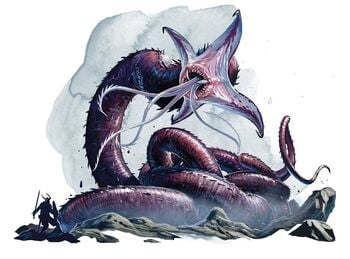 Neothelids were slime-covered worms with a quadri-tentacled mouth that resembled gigantic versions of illithid tadpoles. They were often mistaken due to their purple skin, and massive larval body structure.  A typical neothelid is about 120 ft long, and shared numerous abilities with illithids and elder brains, capable of levitating at will, resisting magical abilities, sensing sentient beings, and possessing blindsight.  Neothelids could use their mouth tentacles to squeeze and draw in prey, swallowing them whole and digesting them from inside their stomachs.