Blighted Village is a location in Baldur's Gate 3 (BG3). On this page, you can find the information about the map, quests, enemies, notable items and other useful tips about Blighted Village. 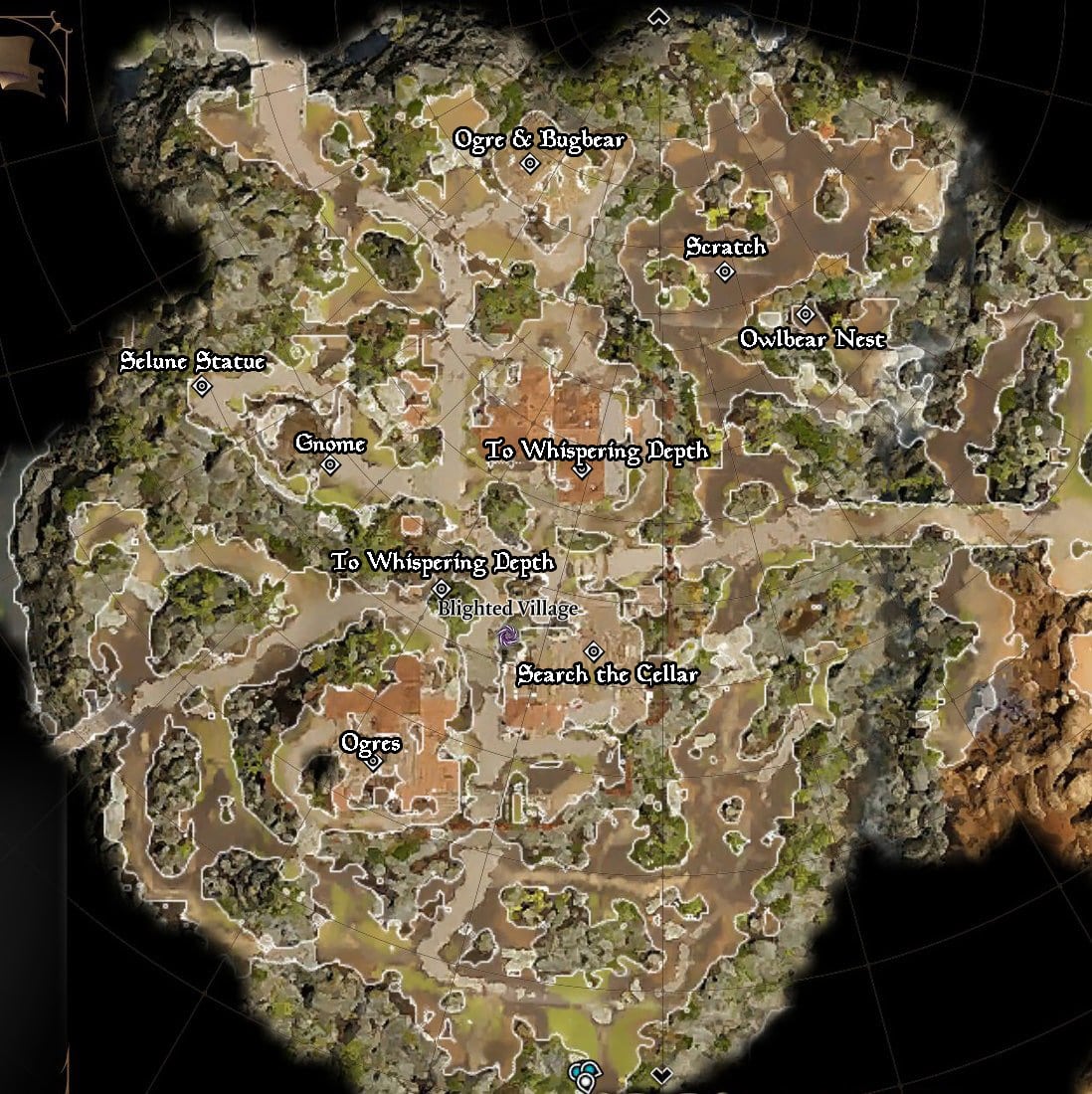 Using the tadpole's psionic power or good persuasion/deception can avoid the fight with the goblins in this village. Otherwise, try using the path on the left of the front gate to ambush them. (If you are a female drow, you can pretend to be their boss) 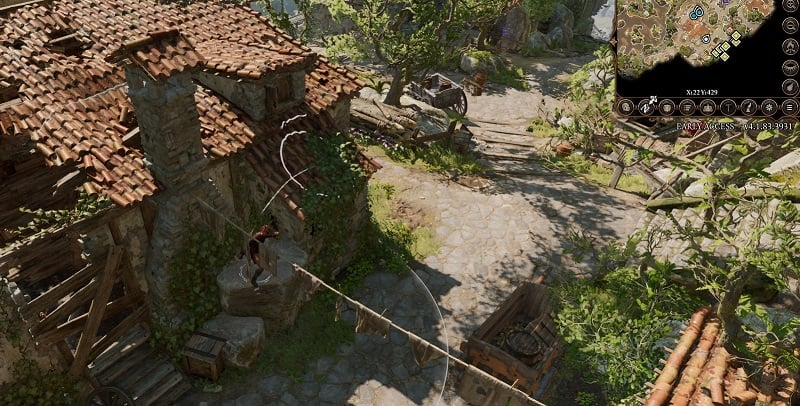 You can put crates together to climb to roofs, ambush these goblins from behind makes the fight much easier.

Lump the Enlightened, an ogre in a house has a Warped Headband of Intellect. (You can also recruit the ogres to help you in future battle by giving them gold or persuade them (DC 20), they will give you a horn for summoning.) Behind the house of ogres, there is a chest hidden under a rock.

Buthir and Grukkon, is having fun inside the barn. If you insist to open the door, get ready to fight an angry ogre and a bug bear. (You can place your team members on the high ground nearby, or on the roof before the fight.)

At the windmill of Blighted Village, there is a deep gnome tied to the blades of a windmill. He's being tormented by a group of goblins.

You can defeat the Goblins by force (carefully place your characters on the roof helps a lot), or persuade them to leave. (Persuasion checks, Or you can use the tadpole) 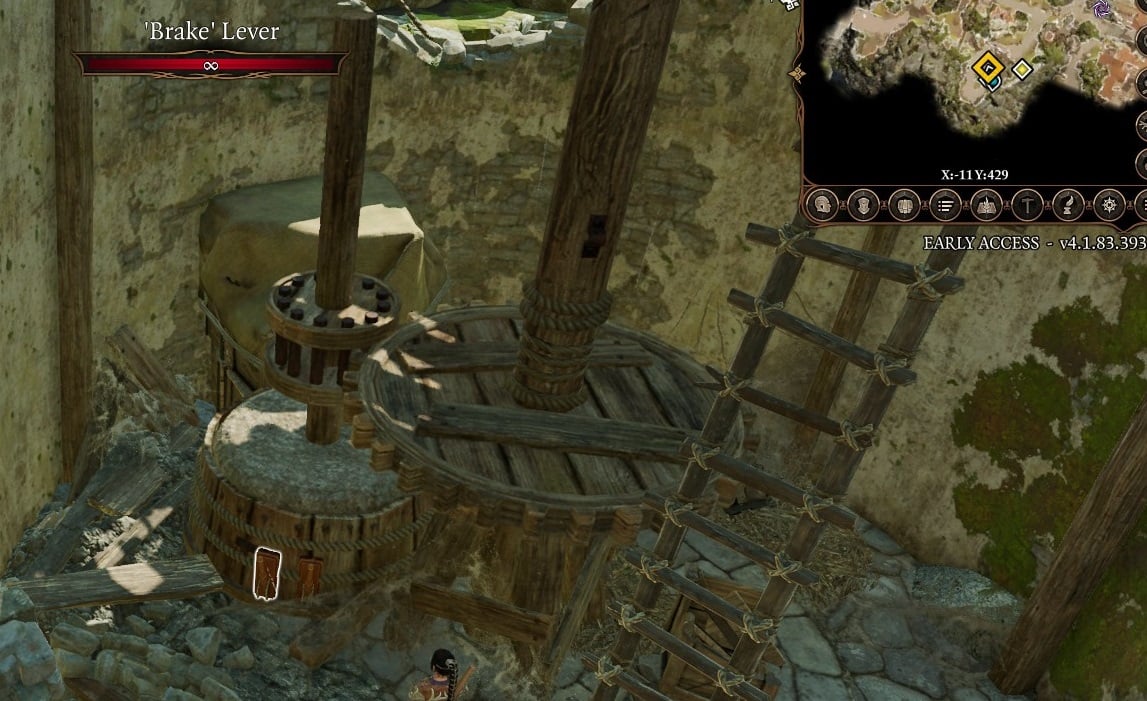 (Pull the brake lever to stop the windmill, release means throw him away in goblin language.) 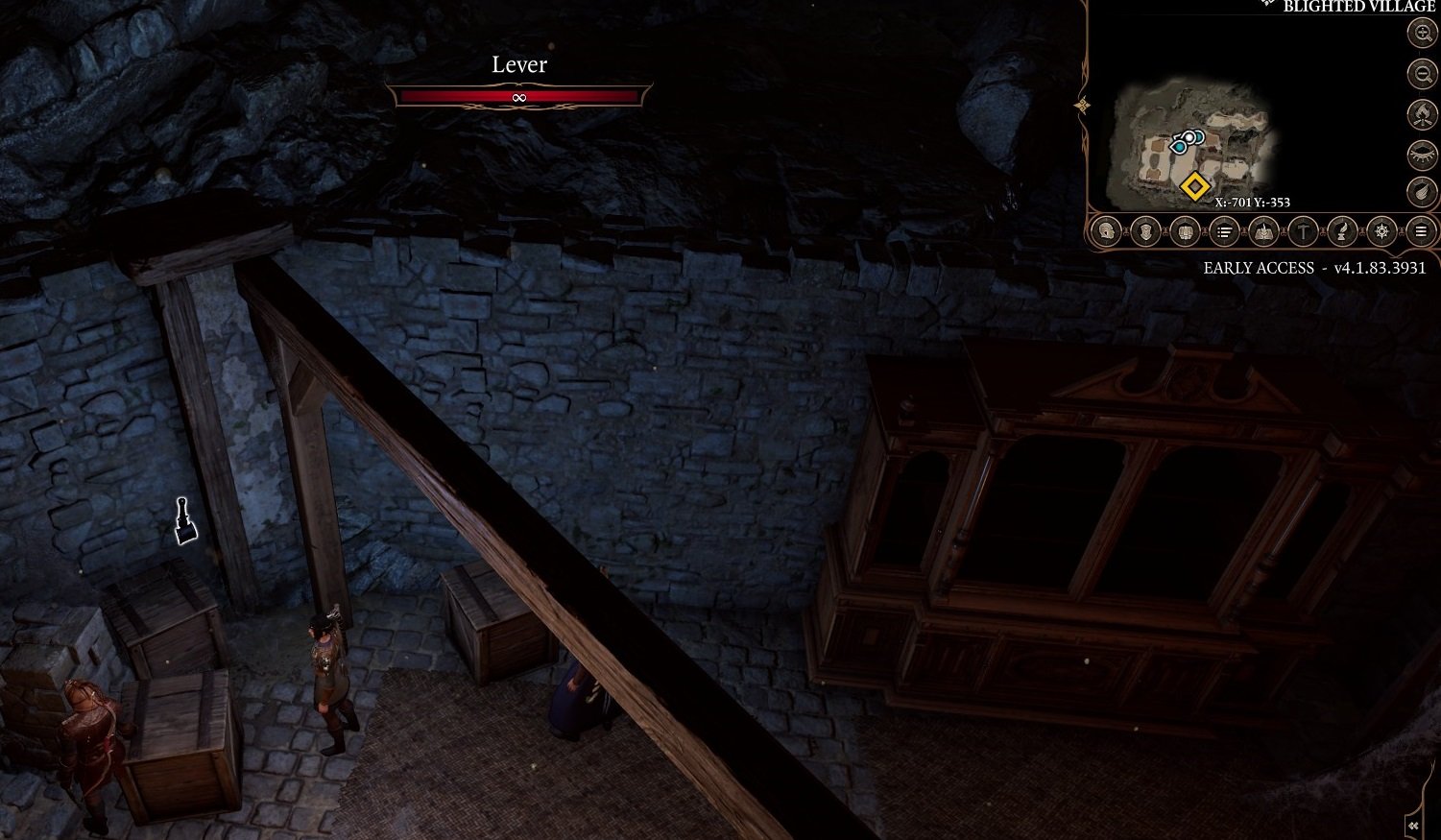 Inside the doctor's basement, there is a hidden lever behind three chests. Pull it to reveal the hidden passage behind the bookshelf. 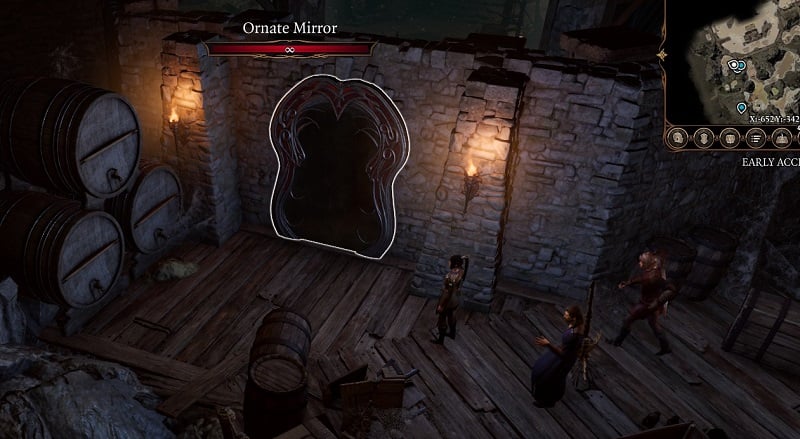 To open this mirror, you need to make it believe you are an ally of its master. Tell it you despise Szass Tam (A legendary lich and leader of Red Wizard of Thay.), and you seek survival and power. If you give the wrong answer, this mirror will send an exploding construct to destroy you. Loot the items inside the necromancer's lab and start the quest Search the Cellar. (The book is placed on a pressure-sensitive trap, put something else on it before taking the book or you will trigger the fireball trap.)

There are 2 ways to enter this area. Either by using the well in Blighted Village, or through the basement of the house on the right of the village front gate. 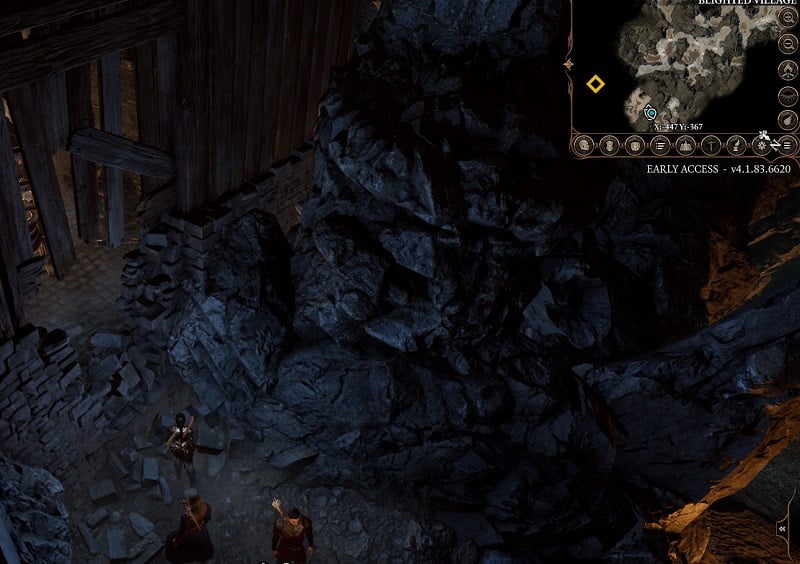 (Break the wall to enter the Whispering Depth.) 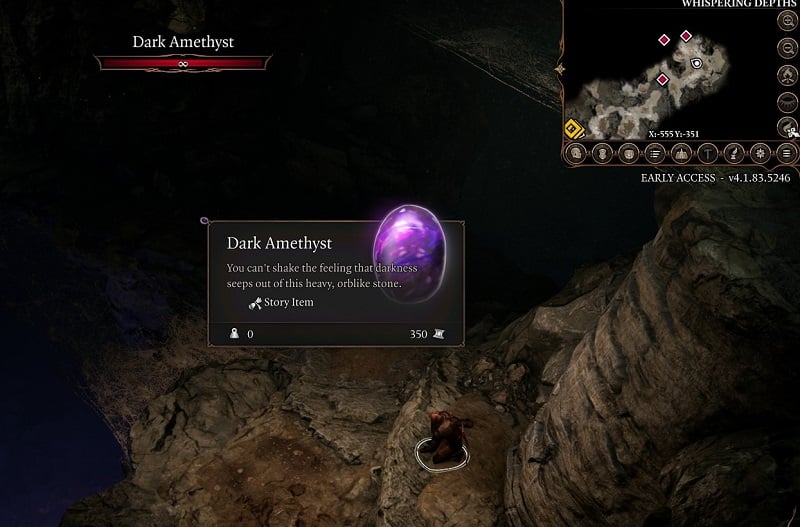 This place is filled with Phased Spiders. You can use your rogue to sneak in and get the Dark Amethyst, or fight your way there. (For Quest Search the Cellar, use it to open the necromancer tome.) 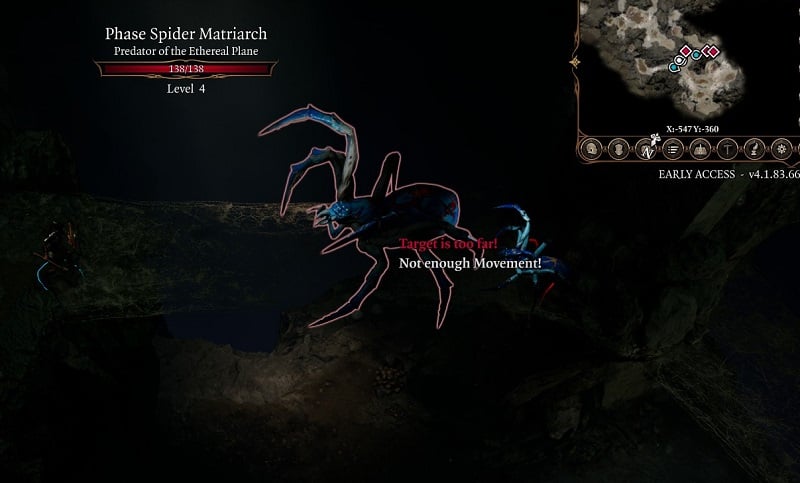 Be careful when you exploring Whispering Depth, there's Phase Spider Matriarch near the waypoint. Defeat her and you can get Poisoner's Robe (Uncommon clothing).

With the Feather Fall spell, you can directly jump to Underdark from Whispering Depth. 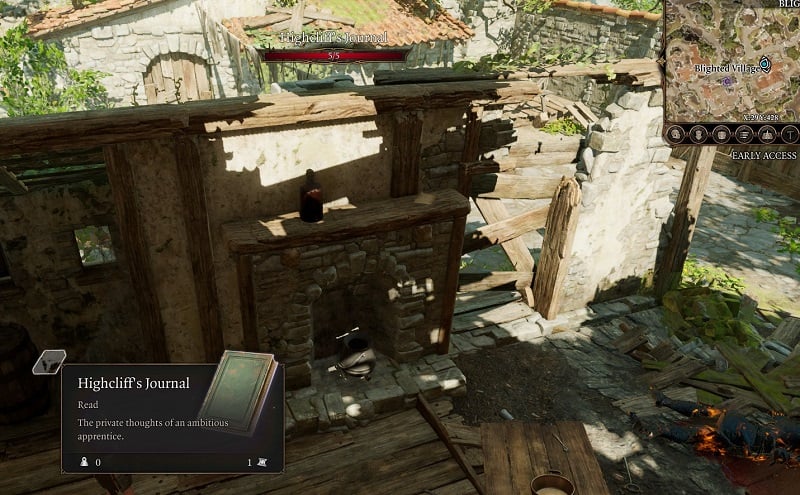 In one of the house, pick up and read Highcliff's Journal to acquire the quest Finish the Masterwork weapon.

The following Backgrounds have objectives related to this location: